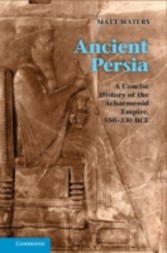 Ancient Persia - A Concise History of the Achaemenid Empire, 550-330 BCE

Ancient Persia - A Concise History of the Achaemenid Empire, 550-330 BCE

The Achaemenid Persian Empire, at its greatest territorial extent under Darius I (r.522-486 BCE), held sway over territory stretching from the Indus River Valley to southeastern Europe and from the western Himalayas to northeast Africa. In this book, Matt Waters gives a detailed historical overview of the Achaemenid period while considering the manifold interpretive problems historians face in constructing and understanding its history. This book offers a Persian perspective even when relying on Greek textual sources and archaeological evidence. Waters situates the story of the Achaemenid Persians in the context of their predecessors in the mid-first millennium BCE and through their successors after the Macedonian conquest, constructing a compelling narrative of how the empire retained its vitality for more than two hundred years (c.550-330 BCE) and left a massive imprint on Middle Eastern as well as Greek and European history.