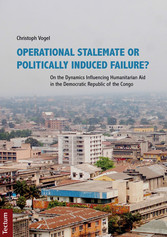 Operational Stalemate or Politically Induced Failure? - On the Dynamics Influencing Humanitarian Aid in the Democratic Republic of the Congo

Operational Stalemate or Politically Induced Failure? - On the Dynamics Influencing Humanitarian Aid in the Democratic Republic of the Congo

Nowadays, humanitarians find themselves constantly challenged by adverse conditions and questioned about their instrumentalisation through international stakeholders and local powerbrokers. Economic aspects such as the so-called 'contract fever' and increasing convergence of humanitarian and political action have become common to almost all contemporary humanitarian emergencies. Aid organisations have multiplied in terms of financial and human resources, political weight and in numbers of single organisations. Thus the question emerges: Why is their action still characterised by a considerable degree of nonfulfillment concerning set targets and failure in providing substantial relief to populations affected by catastrophes? Employing the concepts of institutional economics of aid, state failure, and war economy, Christoph Vogel contributes to the current discourse on the role of humanitarian aid in violent conflict and unveils the above presented phenomena by analysing humanitarian aid in the Democratic Republic of the Congo's ongoing 'complex emergency'.

Christoph Vogel holds a Master's Degree from Cologne University and has also studied at Makerere University Kampala. He has visited the Democratic Republic of the Congo and some of its neighbouring states on various occasions for scientific and professional purposes. Currently, he is working towards his PhD on the political economy of humanitarian aid in violent conflict.