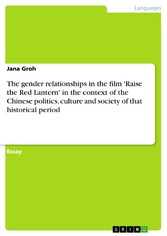 The gender relationships in the film 'Raise the Red Lantern' in the context of the Chinese politics, culture and society of that historical period

The gender relationships in the film 'Raise the Red Lantern' in the context of the Chinese politics, culture and society of that historical period

Essay from the year 2006 in the subject Orientalism / Sinology - Chinese / China, grade: 2,0, University College Cork (UK - University College York), 13 entries in the bibliography, language: English, abstract: At the beginning of the twentieth century China experienced many changes in nearly every respect. The country transformed into a modern state and in doing so traditions changed as well. For example China changed its form of government by abolishing its empire and establishing a republic. The old imperial regime was seen as very old-fashioned: 'un monde que la technique et les idÃ©es modernes n'ont pas encore touchÃ©' (Bauchau, 1982, p. 19; translation: a world which has not yet been touched by the modern technic and ideas). If China wanted to be part of the modern westernised world, it had to modernise itself. But even though the last emperor abdicated in 1912, many traditions still lived in the Republic of China, some until the 1940s (cf. Brugger, 1977, p. 20). This can be seen in the Chinese film 'Raise the Red Lantern'. This movie which original title is 'DÃ  hÃ³ng denglÃ³ng gaogaou gua' was made by the fifth generation director Zhang Yimou, and was published in 1991. The film set in the 1920s is about the young woman Songlian who actually has studied at university for one year. When her father dies, she cannot afford going to university any longer. Her stepmother marries her off to a rich man, Chen Zuoqian, in whose household traditions are most important. Songlian becomes the fourth concubine of this man. Every evening red lanterns are being hung up in the quarter of that wife who Chen Zuoqian is going to spend the night with. This also means that the respective wife seems to be the favourite one so that she gets more power over the whole family, e.g. she can decide about the dishes. Thus the four women, who see each other as rivals, fight each other whenever they can. Songlian tries to struggle hard for a place in the family, but she somehow fails. In the end she causes the death of two people, of her servant Yan'er and of the third concubine Meishan, so that she finally gets insane. In this film one can watch the traditional Chinese gender relationships. These are analysed more closely in this essay.