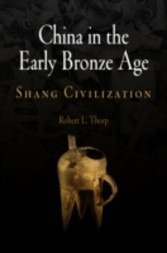 One of the great breakthroughs in Chinese studies in the early twentieth century was the archaeological identification of the earliest, fully historical dynasty of kings, the Shang (ca. 1300-1050 B.C.E.). The last fifty years have seen major advances in all areas of Chinese archaeology, but recent studies of the Shang, their ancestors, and their contemporaries have been especially rich. Since the last English-language overview of Shang civilization appeared in 1980, the pace of discovery has quickened. China in the Early Bronze Age: Shang Civilization is the first work in twenty-five years to synthesize current knowledge of the Shang for everyone interested in the origins of Chinese civilization.China in the Early Bronze Age traces the development of early Bronze Age cultures in North and Northwestern China from about 2000 B.C.E., including the Erlitou culture (often identified with the Xia) and the Erligang culture. Robert L. Thorp introduces major sites, their architectural remains, burials, and material culture, with special attention to jades and bronze. He reviews the many discoveries near Anyang, site of two capitals of the Shang kings. In addition to the topography of these sites, Thorp discusses elite crafts and devotes a chapter to the Shang cult, its divination practices, and its rituals. The volume concludes with a survey of the late Shang world, cultures contemporary with Anyang during the late second millennium B.C.E. Fully documented with references to Chinese archaeological sources and illustrated with more than one hundred line drawings, China in the Early Bronze Age also includes informative sidebars on related topics and suggested readings.Students of the history and archaeology of early civilizations will find China in the Early Bronze Age the most up-to-date and wide-ranging introduction to its topic now in print. Scholars in Chinese studies will use this work as a handbook and research guide. This volume makes fascinating reading for anyone interested in the formative stages of Chinese culture.