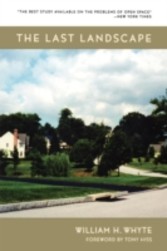 The remaining corner of an old farm, unclaimed by developers. The brook squeezed between housing plans. Abandoned railroad lines. The stand of woods along an expanded highway. These are the outposts of what was once a larger pattern of forests and farms, the ",last landscape.", According to William H. Whyte, the place to work out the problems of our metropolitan areas is within those areas, not outside them. The age of unchecked expansion without consequence is over, but where there is waste and neglect there is opportunity. Our cities and suburbs are not jammed, they just look that way. There are in fact plenty of ways to use this existing space to the benefit of the community, and The Last Landscape provides a practical and timeless framework for making informed decisions about its use. Called ",the best study available on the problems of open space", by the New York Times when it first appeared in 1968, The Last Landscape introduced many cornerstone ideas for land conservation, urging all of us to make better use of the land that has survived amid suburban sprawl. Whyte's pioneering work on easements led to the passage of major open space statutes in many states, and his argument for using and linking green spaces, however small the areas may be, is a recommendation that has more currency today than ever before.