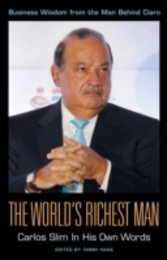 World's Richest Man: Carlos Slim In His Own Words

World's Richest Man: Carlos Slim In His Own Words

When Carlos Slim claimed the top spot on Forbess annual list of the worlds richest people in 2010, it was the first time since 1994 that the spot wasnt occupied by an American and, even more impressively, the first time that a person from a developing country topped the list. Although Slim is fabulously wealthy, he lives a relatively modest life, residing in the same house in Mexico City for the last 40 years. His extreme wealth and steadfast humility make him a unique creature in the world of the rich and famous. The most revelatory book available about this Mexican business magnate, comprised entirely of Slim's own thought-provoking and inspiring quotes, The World's Richest Man: Carlos Slim In His Own Words is a comprehensive guidebook to the inner workings of the world's wealthiest man and one of its most prominent philanthropists. Over 200 quotes on business, investing, entrepreneurship, leadership, management, wealth, and life provide an intimate and direct look into the mind of this modern business icon.