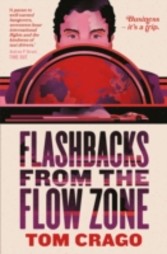 Flashbacks from the Flow Zone

Flashbacks from the Flow Zone

Flashbacks from the Flow Zone tracks author Tom Crago as he grows a video game business in the first decade of the new millennium. From crashing the Lingerie Bowl after-party poolside in Hollywood, to making friends inside a Las Vegas limousine and getting bar-side in the underbelly of Tokyo, Tom does more deals in bars than boardrooms and takes readers with him as he parties with the big personalities of his industry. The view at times is hazy, but this is about the ride. Business - it's a trip...and this is a whole new kind of travel story. A raging, hilarious, anti-memoir, Flashbacks from the Flow Zone takes a whole new approach to the work trip, where the line between work and pleasure is forever blurred.I had awoken late that Manhattan morning, shattered, confused, and nursing a hangover born of the kind of bored, incessant drinking that has a habit of accompanying twenty-five-hour journeys, especially those involving three-hour transits through the absurdist morass that was the Tom Bradley terminal at Los Angeles International Airport. It was difficult to blame my alarm clock as I had neglected to set it, and in any event there was no time to point fingers. I was by that stage more than an hour late for the only meeting of moderate substance that I'd scheduled during a three-day stay in New York...'A no-holds-barred chronicle through some of the most interesting cities during some of the wildest years of the video game business.' Henk Rogers, Tetris Company'A paean to well-earned hangovers, seventeen-hour international flights and the kindness of taxi drivers.' Andrew P Street, Time Out