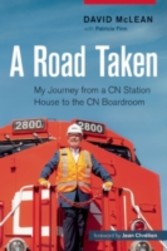 Nineteen years ago, David McLean was appointed by the prime minister of Canada to the board of directors of CN, after which he was elected chairman. McLean has been reelected each year and will retire in April 2014. In A Road Taken, the longest-serving chairman of the board in CN history explains complex business issues in very human terms. McLean's stories include his leadership role in the privatization of the company and the intrigue and egos in the behind-the-scenes race to launch the biggest IPO in Canadian history at that time. They also include the adventure and challenge of a prairie childhood, a university education fuelled by team sports and ambition, and a successful career in law and business. McLean plumbs the depths and delivers a treatise on leadership in business and life that is as moving as it is honest.