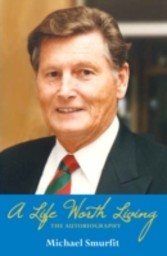 A Life Worth Living tells the story of Michael Smurfit and the company he built. From humble beginnings, through years of hard work, it documents the Smurfit Group's seemingly inexorable growth, the challenges faced and overcome, and the many deals that continually doubled the size of the business every three or four years. It shows Michael's 'logical opportunism' in action, and explains how the Smurfit culture and systems provided a world-beating competitive advantage.Born in St Helens, Lancashire in August 1936, MichaelSmurfit joined his father's business, Jefferson Smurfit& Sons Ltd. in Dublin, straight from school to learn thepapermaking business 'from the bottom up'. Two years after the company floated on theIrish Stock Exchange, Michael and his brother Jeff became Joint Managing Directors, asJefferson Senior took on the role of Chairman and Chief Executive. Then followed 30 years ofacquisitions, as the Jefferson Smurfit Group became Ireland's first multinational companyand one of the largest paper and packaging companies in the world. In 2002, Michael tookthe Smurfit Group private, retiring as CEO but remaining Chairman. In this role, he steereda merger with Kappa Packaging BV, which successfully refloated in 2007 as Smurfit KappaGroup.Michael's life outside Smurfit - his chairmanship of the Racing Board and of Telecomireann, his interest in horseracing, his ownership of The K Club and the triumph thatwas the Ryder Cup 2006 - all feature, alongside his love and commitment to his family.Truly, a life worth living.