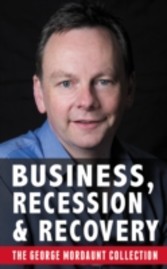 The George Mordaunt Collection contains his two books Shepherd's Pie and Back in the Driving Seat. Since the start of the recession in Ireland, the public has been infuriated by reports of self-serving bankers, developers and government ministers, but little has been reported about the personal trauma and the devastating effect of this crisis on Irish-owned businesses and the hard-working people trying to keep them going. George Mordaunt believes that many Irish businesses are now in trouble not only because of the recession, but because of the response of business owners to the recession. With raw honesty he outlines the effect that this recession has had on him, his young family, his marriage and his business. He shares his most private moments of despair and fear, yet provides a story of hope by demonstrating how things can be turned around when the situation is at its bleakest. In Back in the Driving Seat Mordaunt now delivers a guide to recovery sharing for the first time confidential details of the steps that he took and the unpopular decisions that he had to make to ensure the survival of his family business, while clearly demonstrating that now more than ever people must decide on and execute their end game.This is a story of continued survival, self education, creative thinking and ruthless execution. It's a story of hope and inspiration and of finally realising that the time to act is now so that you can enjoy the path to recovery.