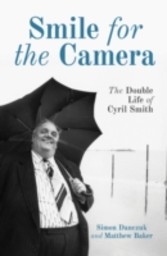 Smile for the Camera - The Double Life of Cyril Smith

Smile for the Camera - The Double Life of Cyril Smith

No politician pandered to the medias appetite for personality more than Liberal MP Cyril Smith. Instantly recognisable for his colossal build, Smith was a larger-than-life character in a world of dull grey men. He spoke for the everyman, and his forays into show business blurred the lines between politician and celebrity. Yet Big Cyril was anything but the roly-poly gentle giant of popular imagination. In November 2012, Rochdale MP Simon Danczuk outed Smith in Parliament as a serial child abuser. Now, in an astonishing tale of a spectacular misuse of power, he describes how Smith used his profile to groom and sexually abuse young boys, frequently in institutions he had helped to establish. His victims, often troubled boys from broken homes, had no voice against their attacker and, though rumours abounded, Smiths appalling crimes went unnoticed by the public and unpunished by the authorities. A story deeply rooted in the political culture of the 1970s and 80s, Smile for the Camera brings to life Cyrils domineering personality and his sickening predilections. It reveals the extraordinary double life of a man who hoodwinked the public and evaded justice for decades.