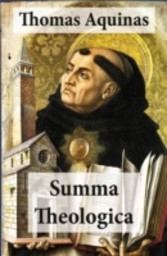 This carefully crafted ebook: ",Summa Theologica (All Complete & Unabridged 3 Parts + Supplement & Appendix + interactive links and annotations)", is formatted for your eReader with a functional and detailed table of contents.This ebook is the best-known work of Thomas Aquinas (c.1225-1274). Although unfinished, the Summa is ",one of the classics of the history of philosophy and one of the most influential works of Western literature.", It is intended as an instructional guide for moderate theologians, and a compendium of all of the main theological teachings of the Catholic Church. It presents the reasoning for almost all points of Christian theology in the West. The Summa Theologica is divided into three parts, and each of these three parts contains numerous subdivisions. Part 1 deals primarily with God and comprises discussions of 119 questions concerning the existence and nature of God, the Creation, angels, the work of the six days of Creation, the essence and nature of man, and divine government. Part 2 deals with man and includes discussions of 303 questions concerning the purpose of man, habits, types of law, vices and virtues, prudence and justice, fortitude and temperance, graces, and the religious versus the secular life. Part 3 deals with Christ and comprises discussions of 90 questions concerning the Incarnation, the Sacraments, and the Resurrection. Some editions of the Summa Theologica include a Supplement comprising discussions of an additional 99 questions concerning a wide variety of loosely related issues such as excommunication, indulgences, confession, marriage, purgatory, and the relations of the saints toward the damned. Scholars believe that Rainaldo da Piperno, a friend of Aquinas, probably gathered the material in this supplement from a work that Aquinas had completed before he began working on the Summa Theologica.It seeks to describe the relationship between God and man and to explain how man's reconciliation with the Divine is made possible at all through Christ. To this end, Aquinas cites proofs for the existence of God and outlines the activities and nature of God. Approximately one-half of the Summa Theologica then examines the nature and purpose of man. Finally, Aquinas devotes his attention to the nature of Christ and the role of the Sacraments in effecting a bridge between God and man. Within these broad topical boundaries, though, Aquinas examines the nature of God and man in exquisite detail. His examination includes questions of how angels act on bodies, the union of body and soul, the cause and remedies of anger, cursing, and the comparison of one sin with another. Aquinas is attempting to offer a truly universal and rational view of all existence.Thomas Aquinas, O.P. (1225 - 1274), also Thomas of Aquin or Aquino, was an Italian Dominican priest, and an immensely influential philosopher and theologian in the tradition of scholasticism, within which he is also known as the ",Doctor Angelicus",, ",Doctor Communis",, and ",Doctor Universalis",. He was the foremost classical proponent of natural theology, and the father of Thomism. His influence on Western thought is considerable, and much of modern philosophy was conceived in development or refutation of his ideas, particularly in the areas of ethics, natural law, metaphysics, and political theory.