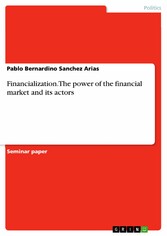 Financialization. The power of the financial market and its actors

Financialization. The power of the financial market and its actors

Seminar paper from the year 2014 in the subject Politics - International Politics - Topic: Globalization, Political Economics, grade: 2.3, University of Erfurt, course: International Relations, language: English, abstract: Finacialization is a process by which financial markets, financial institutions and its actors have gained a major influence, or indeed Hegemony, over economic policies, economic outcomes, and the social field. It mainly impacts the behavior between financial sector and real sector, promoting the first, through numerous phenomena: Deregulation of the financial sector and the development of new instruments, capital flow liberalization as well as exchange rate instability, the emergence of new powerful institutional investors, shareholder-Value-orientation and changes in the enterprises' corporate governance, an easier access to credits for the underbanked social groups, a higher level of real interest rate in comparison to the post-war period. Income transfer from the real sector to the financial sector as well as an increased debt, increasing income inequality and wage stagnation are among financialization's consequences. Additionally, the financial process operates through changes in the operation of financial markets as well as in the behavior of non-financial corporations, and through changes in economic policy. But where does this financialization process come from? We can argue that its roots are to be traced back in the U.S. after the collapse of the Fordist compromise in the early 1970s, but it clearly develops throughout the 1980s and 1990s. On the other hand some intellectuals argue that it has been brought by the emergence of Neoliberalism at the end of the 1970s and the beginning of the 1980s, which, by advocating free trade, deregulation, liberal economy, privatization as well as an overall reduction in government control of the economy, set the stage for Financialization's growth.