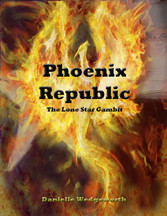 Phoenix Republic is a political thriller describing an economic pivot point that follows three sisters as they struggle with the destruction of Western culture's credit driven way of life. Following a collapse of the U.S. dollar, three women from Texas each struggle to overcome personal failings as they make their way back home to the Texas ranch where they grew up.