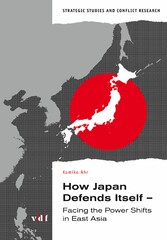 How Japan Defends Itself - Facing the Power Shifts in East Asia

How Japan Defends Itself - Facing the Power Shifts in East Asia

This work analyzes the necessity of changing Japan's present defense policy. The discussion of Japan's defense strategy has been an unpopular topic in Japan for a long time. The reason lies in its gruesome military aggression during the Second World War. Until the end of the Cold War, Japan did not show big concerns about its defense politics because the United States had protected it from communist enemies. Today, however, China's emerging power and North Korea's nuclearization pose serious threats. America, by contrast, suffers from great financial debts and is facing declining military forces. Japan's main doubt has thus come to light: Would America protect Japan in the case of hostile events? Since the world remains a realistic world, nuclearization can be an option in order to deter enemies. It turned out that Japan has not much of a choice but could provoke a discussion to overcome the nuclear dilemma.