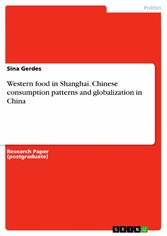 Research Paper (postgraduate) from the year 2014 in the subject Politics - International Politics - Topic: Globalization, Political Economics, grade: 1,7, University of Paderborn, language: English, abstract: Eating is a basic need for human life and the variety of offered food worldwide is huge. In China, the fast developing nation with an increasing number of habitants and a booming economy, the offer of foreign cuisines grows steadily. The variety includes Western dishes, too, which are slowly establishing in China. Existing differences between Chinese and Western restaurants and dishes are obvious. Thus, this paper investigates which factors influence the consumption patterns of the Chinese regarding Western food, taking the current offer in Shanghai as an example. Exploring this question a qualitative analysis with Chinese partici-pants was conducted. For the analysis, 15 categories were developed based on 7 interviews, which provided detailed information about the participant's attitude, opinion and consumption behavior regarding Western food. The Chinese consciously chose Western restaurants because of the environment there, the different taste of the food or to learn more about a foreign culture. Due to the Opening-up policy and an ongoing globalization process, the younger generation becomes more open-minded and interested in experiencing something new and demands an increased offer with high quality. Implications and limitations are discussed. This research paper reveals the need to question the consumption patterns of the Chinese in order to learn about their wants and figuring out what they like and dislike regarding Western food.