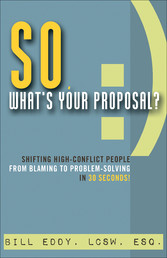 So, What's Your Proposal? - Shifting High-Conflict People from Blaming to Problem-Solving in 30 Seconds

So, What's Your Proposal? - Shifting High-Conflict People from Blaming to Problem-Solving in 30 Seconds

Will Emma and Jake Ever Agree?

“So, what’s your proposal?” I asked Emma. She was complaining about her husband, Jake, whom she was divorcing. I was their divorce mediator. I could see Jake simmering on the other side of my round mediation table. I didn’t know when he would start yelling at her again.

“What do you mean?” she asked, irritated at my interruption.

Jake wanted a 50-50 co-parenting schedule and she had been criticizing his parenting skills.

“You don’t know anything about their schoolwork! You’ve never attended a parent-teacher conference! You work late all the time!” she said, then proceeded to go on and on about all of his weaknesses as a parent. Were they true? Or not? That wasn’t for me to decide.

I learned a long time ago that telling someone like Emma to stop criticizing her husband or to stop talking about the past would just trigger more defensiveness. She would think that I was taking Jake’s side and I’m supposed to be neutral as a mediator. So, without criticizing her at all, I just asked: “So, what’s your proposal?” in an effort to shift her from blaming to problem solving.

The situation was tense. I also knew that Jake was about to angrily defend himself. People in his shoes in a divorce mediation typically—and angrily—say something like: “That’s not true! I know a lot about their homework! I attended a parent-teacher conference a year or two ago! I don’t come home from work late every night—I can change my schedule for the nights I have the children!”

And I knew that after he defended himself, she would predictably defend her position, saying, “Tell me one thing about what C.J. and Mac are learning at school this week! Yeah, you attended a parent-teacher conference once in five years! If you could change your schedule so easily, why didn’t you do it when we lived together and I was taking care of the kids 90 percent of the time!”

Letting Emma criticize Jake or letting him defend himself would be an endless cycle—and it will not bring them any closer to resolving their conflict.

“What I mean,” I said, “is that it’s best to make a proposal whenever you have a concern or criticism of the other parent. Remember, when we started the mediation, I said that we would be focusing on the future and what you want rather than rehashing the past and what you don’t want. So, how would you turn your concerns into a proposal?”

“Oh, that’s right. I forgot,” Emma said with a frown, but she quickly calmed down and sat up in her seat. “I suppose that my proposal would be that Jake have the children every other weekend and that I have them during the week.”

“No way!” exclaimed Jake. “I want 50-50 and that’s all there is to it!” Then he turned to me and insisted, “I need to defend myself here after everything she’s said!”

You Don’t Have to Defend Yourself

“Actually, you don’t have to defend yourself here at all—not in mediation,” I quickly replied. “I’m just a neutral person and I don’t pay much attention to what each of you says about the past and each other’s behavior. Remember, I’m not a judge of the past. My focus is on the future and helping you reach agreements about how to manage it as parents. Now Emma has made a proposal. Do you remember our method for responding to that?”

“I forget. Can you remind me?” Jake answered, as he eyed Emma and took a deep breath.

“First,” I said, “you can ask her questions about her proposal—like when the weekend would start and end. Some people start weekends Saturday morning and end Sunday night. Others start the weekend Thursday evening—in which case you would take them to school on Friday—and end Monday morning by delivering them to school. So it’s very common to ask, ‘What do you mean in specific terms?’ when she says you could have every other weekend.

“Well, I certainly don’t agree with her having almost 90 percent of the parenting time,” he said. “She wants too much control over the children. She doesn’t really want me to spend any time with them!”

“That’s not true,” Emma said quietly, shaking her head no.

“Jake, let’s not get ahead of ourselves. First, did you have any questions for Emma about her proposal?” I replied, trying to ignore their fast complaints about each other. I wanted to keep them focused on this very simple three-step process of making proposals, asking questions, and giving a short response.

“No!” he said emphatically. “But wait. What did you mean by every other weekend? When would I get the kids and when would you get them back—in your propooooooosal?” He dragged out the word.

“I resent that tone of voice!” Emma exclaimed. “Bill, tell him not to talk to me that way.”

They both nodded their heads yes. I knew they wanted to reach agreements and move forward in their lives. They weren’t just arguing for the sake of arguing. They were both sincere in their points of view—they were just anxious about being away from their children and in different ballparks about how to schedule time with them.

I continued: “You can mostly ignore comments, intentions, tone of voice, arguments about fairness, and other side issues by staying focused on the details of your proposals, asking questions, and then responding to the proposals. So Emma, go ahead and see if you can answer Jake’s question about your proposal.”

“Oh yeah,” she replied. “Um . . . you could pick them up right when school gets out on Fridays and return them to me on Sundays at six in the evening.”

“And that’s only every other weekend?” Jake exclaimed. “I’d be nuts to accept your limitations on my time with our kids. And I’m not doing all the driving.”

Stay focused, I told myself. I know this can work. I turned to Jake and asked: “So is that a yes, a no, or an I’ll think about it?”

“Well, I would say ‘Yes’ to that schedule for the weekends. But I want more time during the week! I want to help them with their homework and put them to bed at night—more than just the weekend. I want 50-50!”

“So that’s a ‘Yes’ on your weekend schedule!” I exclaimed. “Does that mean, Jake, that you agree to Emma’s proposal of alternate weekends? I’m just speaking of the weekends for right now.”

“I think that means you have an agreement,” I exclaimed. “Is that correct, Emma? If so, I better write that down.”

“Well, hold on,” I said. “You have an agreement for the weekends. Let me write that down before we get into proposals about the weekdays.”

They were silent as I wrote and spoke out loud: “Emma and Jake agree that each parent shall have the children on alternate weekends from Friday after school through Sunday at 6 p.m. Oh wait,” I said. “Does that mean Dad picks up the children Friday afternoon at school or that they walk home to Dad’s house?”

I wanted them to stay focused on details, so they wouldn’t slip back into bickering.

“Good!” Emma exclaimed. “They like it when he picks them up at school.”

“Did you hear that, Jake?” He nodded. “It’s always helpful to recognize the good things that each other does—both ways.

“Now,” I said. “Jake, I think you were about to make a proposal. What were you going to say a couple minutes ago?”

“I want at least one weekday overnight, but I’d really like two. I don’t see why I shouldn’t just have 50 percent of the parenting time. I know that’s what I’d get at court. In fact, this is ridiculous. I just—”

“Hold on,” I interrupted. “Let’s stay focused on what you want in here right now. Save your discussion of court for the end of the mediation session—if you haven’t reached enough agreements. Right now, let’s focus on your...