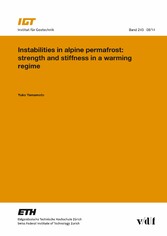 Instabilities in alpine permafrost: strength and stiffness in a warming regime

Instabilities in alpine permafrost: strength and stiffness in a warming regime

Global climate change is contributing to hazards to infrastructure in cold regions, as engineers try to quantify uncertainties through a risk-based consideration of sensitivity and consequences, and thereby to mitigate the risks arising from permafrost degradation. A gradually rising Mean Annual Air Temperature, combined with more extreme rainfall conditions and fewer 'freezing degree days', mean that the water phase in soil that has been frozen for many years in the form of permafrost, is likely to thaw and release groundwater into the voids. Since the properties of warm permafrost can change significantly as its temperature rises, climate change can affect not only the thickness of the active layer and the depth of permanently frozen ground, but also the constitutive behaviour of the permafrost layer. This has significance not only for movements and stability in permafrost slopes but also in rock glaciers, which are ice-rich geomorphological landforms. Furthermore, permafrost degradation is causing changes in land surface characteristics and drainage systems, as warming of rock glaciers leads to accelerated creep. Instabilities may also be triggered as the constitutive properties of permafrot change, either in the form of active layer detachments or at depth through the warming permafrost. Catastrophic debris flows may also occur. Dr Yamamoto has conducted a fundamental and highly innovative experimental investigation into the effect of time and temperature on the creep and shear strength properties of analogue alpine permafrost, under a range of stress conditions that would be experienced in different locations of a rock glacier. She has developed new equipment to maintain the temperature in the frozen soil specimens at Â±0.03Â°C in the previously unexplored range between 0 and -0.5Â°C, and to record acoustic emissions during creep and shearing. Furthermore, she has carried out novel micromechanical investigations into the changes occurring in the solid, ice, air and unfrozen water mixture as a result of shearing. The results of the laboratory tests have been used to provide a deeper insight, not only into the constitutive behaviour of frozen soils, but also a greater qualitative understanding of the geotechnical performance of rock glaciers under warming conditions. In addition, she has extended an existing mechanical constitutive model for soils that includes both soil creep and shear behaviour to develop a semi-coupled Thermal-Hydro- Mechanical (THM) constitutive model. The model, when implemented in a finite element package, allows the laboratory element test data to be predicted, which also validates key aspects of her model rather well. This represents a significant step towards achieving quantitative predictions of the influence of temperature variation on the performance of rock glaciers. Dr Yuko Yamamoto has made original and significant discoveries about the thermomechanical response of frozen soils under a range of stress path tests, by developing and using a range of state-of-the-art experimental techniques and combining these with powerful analytical and numerical methods to interpret and model behaviour of permafrost soils. Her research paves the way for future work that will lead to quantitative modelling of geomorphological process in permafrost landforms, such as the creep and stability of rock glaciers. Prof. Dr. Sarah M. Springman II CBE FREng