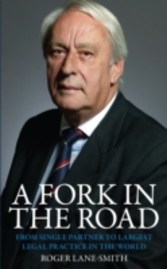 How did Roger Lane-Smith build up the world's largest law firm within 30 years, starting from a tiny office in a Manchester side-street? This compelling autobiography will tell you. Told with candour and great humour, this is the story of one lawyer's determined quest for the biggest and the best - and shows exactly how it was done. Equally at home with Hollywood celebrities such as Aaron Spelling, David Soul and Joan Collins as with captains of industry and commerce, Roger Lane-Smith really has 'seen it all'. The story of his life is about much more than the law - he has been close to some of the key moments of the last 30 years, from the legal shenanigans of the icons of popular culture to the deals he has made at the cutting edge of high finance. Everyone with an interest in the law will find this book a treasure trove of information and gossip, and it will appeal equally to anyone keen to see how a successful business can be built through hard work and astute risk-taking.