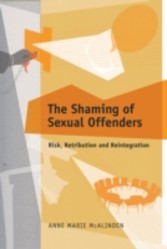 Winner of the 2008 British Society of Criminology Book PrizeSex offenders, particularly those who offend against children, feature prominently in contemporary law and order debates. Child sexual abuse is a small component of the broader category of 'gendered and sexualised violence' which causes significant trauma for victims yet continues to evade conventional approaches to justice. This is evidenced not only by the low number of prosecutions, due mostly to low levels of reporting and evidential difficulties at trial, but also by the failure of the justice system to prevent re-offending, largely due to the limited availability and effectiveness of prison treatment programmes. Following Braithwaite's dichotomy of 'reintegrative' and 'disintegrative' shaming, this book argues that contemporary popular and state-led responses to the risk posed by sex offenders are largely disintegrative in nature. At best, the offender may be labelled, stigmatised and ostracised from the community, while at worst, he may be subjected to violence and vigilante action and ultimately return to offending behaviour. The failure of these retributive responses means there is considerable scope for exploring alternative forms of justice and their potential for improving the outcome for victims, offenders and communities affected by sexual offences.This book examines the controversy of whether restorative justice can be applied to child sexual abuse as one of the most intractable of contemporary societal problems, and if so, what special considerations might apply. Although restorative schemes with sex offenders are in short supply, a few initiatives have developed in Canada and parts of the United States which have effected significant benefits in 'reintegrative shaming.' The book examines whether such ad hoc schemes may be of general application with child sexual abuse and whether they may be implemented on a more holistic basis.