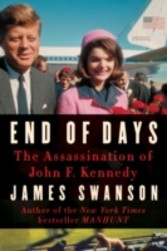 End of Days - The Assassination of John F. Kennedy

End of Days - The Assassination of John F. Kennedy

Here, for the first time in decades, is a gripping, minute-by-minute account of the day President John F. Kennedy was shot, told by James Swanson, author of the New York Times bestseller Manhunt, which so vividly brought the Lincoln assassination to life. In End of Days, he reveals Lee Harvey Oswald's bizarre history of violence and follows John and Jacqueline Kennedy's wildly successful swing through Texas and their fateful Dallas motorcade ride. In the most riveting account ever written about the assassin's shots, Swanson takes us to the sixth-floor Texas Book Depository window to look through Oswald's rifle sights. Swanson also re-creates the last hours of the doomed assassin and the days of national mourning for the president that followed, culminating in a funeral that united the country in a tearful farewell to the fallen commander in chief.In End of Days, Swanson combines extensive research with his unparalleled storytelling abilities to turn the events of one of the darkest days of the twentieth century into a pulse-pounding thriller that will remain the definitive popular account of the assassination for years to come.