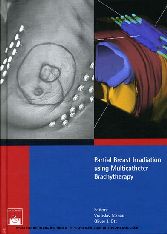 CT-based implant technique after open-cavity surgery: American policy (p. 77)
D.W.Arthur,F.A.Vicini
Introduction
The goal of accelerated partial breast irradiation (APBI) is to deliver the prescribed dose to a specified partial breast target over an accelerated time period of 5 days.The success of APBI depends greatly on the ability to identify the treatment target and having a reliable, reproducible treatment technique that allows control of dose delivery. Several methods of achieving this goal have been developed. Each of these treatment techniques has its own set of advantages and disadvantages. In the United States, there are now three dominant treatment approaches used to deliver APBI, including multi-catheter interstitial brachytherapy,MammoSiteTM balloon brachytherapy, and 3D-conformal external beam radiotherapy [1]. Despite the acceptance of these newer techniques, it must be emphasized that all of the data on which the concept of APBI draws its support has been generated using multi-catheter interstitial brachytherapy, and studies reporting more than 5 years of follow-up represent only multi-catheter brachytherapy experiences.

It also should be highlighted that multi-catheter brachytherapy is a versatile, adaptable technique that can be applied in virtually every patient eligible for APBI. Additionally, with the addition of image guidance, the challenge of catheter placement has been greatly improved and become less dependent on operator experience. This can not be stated for the newer techniques as the success of both the MammoSiteTM balloon catheter and the externalbeam- based 3D-conformal approaches is greatly dependent on the size, shape, and location of the lumpectomy cavity in relationship to the size of the affected breast.This chapter will present the catheter placement techniques utilized in America with multi-catheter brachytherapy. Image-guided catheter placement techniques and the more prominent single-institutional studies will be highlighted.

In the early 1990’s,America began its investigation of APBI. At that time, multi-catheter brachytherapy had been well established and used for several prior decades as a surgical-bed boosting technique following open cavity surgery and whole breast radiotherapy [2]. By that time, institutions had greatly shifted away from the use of breast brachytherapy as a method of boosting since electrons were widely available, but the implant techniques were known and intermittently applied. In the early investigation of breast brachytherapy as the sole method of adjuvant radiotherapy, these established techniques were easily implemented. The original techniques focused on the construction of an implant where catheters were placed to provide the opportunity to deliver the prescription dose in as homogeneous a fashion as possible. Intercatheter and intraplanar distances were defined but the quality of each individual implant remained heavily dependent on the experience of the brachytherapist performing the procedure [3, 4].

Location of the target after open cavity surgery was originally based on the lumpectomy scar, physical exam, and mammogram.This was recognized as an inaccurate method of target localization and as the investigation of APBI continued to progress it became clear that, for APBI to be successful and have the potential to be widely used, the addition of image guidance to aid catheter placement was needed.