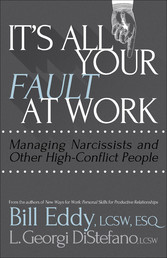 It's All Your Fault at Work! - Managing Narcissists and Other High-Conflict People

It's All Your Fault at Work! - Managing Narcissists and Other High-Conflict People

High-conflict people are blamers. They blame anyone, anywhere. They blame people they know well; they blame complete strangers. They might even blame you!

High-conflict people are everywhere and they are increasing. Customers may yell at you. Co-workers may undercut you. A supervisor may be so disdainful to an employee that he or she becomes depressed and physically illâcosting the business thousands of dollars in lost work, health care costs, and low company morale. Business owners may act in extreme ways that inadvertently destroy the businesses that they built and that you relied upon for income, benefits, and retirement.

This book presents ways to manage the behavior of several types of high-conflict people in the workplace. It will help you recognize their predictable patterns of behavior and then use a simple four-step methodâcalled the CARS Methodâto calm them, analyze your options, respond to their hostility, and set limits on their extreme behavior.

A Pattern of Behavior

Whether youâre a customer, an employee, a manager, a business owner, or another professional who interacts with people in the workplace, âhigh-conflictâ behavior can catch you by surprise and make your life miserableâbefore, during, and after work. Most people with extreme behaviors have a repeated pattern of high-conflict behavior. Itâs part of who they are. They didnât just make a mistake or act badly out of the blueâthey have done this before and will do it again.

We think of them as âhigh-conflictâ people or HCPs (for references to the singular person who is high conflict, weâll use the abbreviation HCP). They arenât just difficult. Theyâre the most difficult people, because their pattern includes the following four key characteristics:

â¢ Preoccupation with blaming others

Yes, chances are that you will eventually become a target of blame for an HCP. And when someone treats you that way, you end up having to deal with it and themâbecause they have patterns of behavior that wonât just go away. For example, letâs look briefly at the narcissistic patterns.

Today, narcissists are in the news and daily conversation more than ever before. Narcissists are, by definition, self-absorbed and egotistical. However, not all narcissists display the pattern of HCPs; some are simply eager to tell everyone how wonderful they are. But narcissistic HCPs are preoccupied with blaming others. They focus on a target of blame and get an ego boost by making themselves look superior to another. They will pick on their target, manipulate them with charm and anger, or outright blame them or publicly humiliate themâall in an effort to distract others from their own shortcomings or to prove how clever and superior they are (at least in their own minds).

Narcissistic HCPs are just one of five types of HCPs we will talk about in this book. Narcissists are the most common of these personalities, according to a nationwide study we discuss in chapter 3.

How It Feels to Deal with HCPs

When youâre dealing with an HCP at workâwhether the person is narcissistic or another type of HCPâyou may feel frustrated, hopeless, enraged, confused, or a lot of other emotions. You may take these feelings home with you and even lose sleep over the high-conflict situation. These are natural fight-or-flight or freeze responses to unrestrained aggressive behaviorâa hallmark of HCPs. Yet most of our natural fight-or-flight responses to HCPs often backfire and make things worse. You may have already discovered this.

You Can Successfully Deal with HCPs

We wrote this book to help you deal with high-conflict situations. These often involve one or more HCPs. As frustrating as these individuals are, you will see that they tend to follow predictable patterns of behavior. Once you learn to identify the warning signs of this behavior, youâll be able to use strategies for dealing with it in effective ways.

These behavior patterns tend to represent five highconflict personalities, which we detail in this chapter. Once you recognizeâor even just suspectâthat you are dealing with a high-conflict person, you can take a proactive approach to keeping the interaction as peaceful as possible. We have developed a four-step method for dealing with HCPs that helps calm their behavior and focuses them on solving problems. We will describe this âCARS Methodâ in chapter 2.

This method isnât complicated, but Itâs often the opposite of what you feel like doing. So practice helps. Therefore, in this book, we have included over a dozen examples of how to apply the CARS Method with potentially high-conflict people.

We have used this method successfully for many years in a wide range of workplace and legal disputes. What is so amazing is that this HCP problem is similar around the world and that the CARS Method works with all types of high-conflict people anywhere. Whatâs more, it works with people who arenât highconflict, so you donât have to worry about identifying them. You can use the CARS Method during your interactions with anyone.

We have been working with high-conflict people in workplace and legal disputes for over twenty years. We met over twenty-five years ago while working together at a psychiatric hospital and then at an outpatient substance abuse and counseling clinic. After that, Bill went into a legal career as a lawyer and mediator. He combined his mental health, mediation, and legal experience to develop the âhigh-conflict personality theoryâ (the HCP Theory), which he has been explaining to legal professionals for over fifteen years. He has also provided consultations and trainings to workplace professionals. Georgi went on to have more than twenty years of experience as a therapist and director of several outpatient mental health and substance abuse programs, an Employee Assistance Professional (EAP) for health care systems, and a workplace trainer for conflict resolution.

We have given seminars and provided consultations to numerous private businesses, government agencies, universities, managers, and employees about high-conflict people and using the CARS Method to deal with them. This is the first book we have written focused exclusively on using the CARS Method in workplace settings. We wanted to show how it can be applied to any situationâincluding yoursâby understanding what to do and what not to do!

Who Is a High-conflict Person?

Successfully dealing with HCPs requires first understanding them. Letâs start by picturing someone in your life who seems to have a pattern of the four key characteristics of HCPs that we described above. The person you pictured may be a mild example or an extreme example of these characteristics. Make sure you donât tell the person that you think he or she is a highconflict person!

There is a wide range of high-conflict peopleâsome are much more difficult than others, although you usually cannot tell right away. Was it clear that the person you pictured was an HCP from the start? Or did he or she succeed at work initially, but then have difficulty in close working relationships and during crises? HCPs are sometimes obvious at first, but in many cases their behavior really catches you by surprise.

They donât respond easily to usual methods of shared problem solving, give-and-take, and negotiation. They have adversarial thinkingâwithout resolution. So their disputes get bigger and bigger, and involve more and more people, resources, and time for everyone around them. Does this description fit your person?

Their four key characteristics get them into frequent conflicts with those nearbyânot just at work, but in their families and in their communities as well. This is a frequent pattern of behavior for them; it is part of their personalitiesâhow they regularly think, feel, and act.

Can you picture your high-conflict person clashing with others in every part of his or her life? This is not unusual but it is a sad situation. Sometimes it helps to realize that your HCP is trapped in self-sabotaging behavior, rather than truly wanting to be this way. HCPs just canât see what they are doing, because they have a barrier against looking at their part in a problem; this means that they donât change anything that might make it better. Theyâre preoccupied with other peopleâs behavior and blaming them for any conflict.

In other words, when thereâs a conflict, the âissueâ is often not the issue. Their personality is the real issue and there is an underlying personality pattern that tends to include the following: