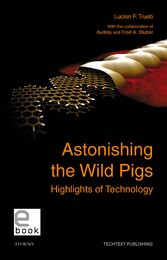 A hydraulic machine for astonishing wild pigs was one of the many technological highlights the author encountered in the course of his career as a research scientist and science writer. Writing a book about them, never taking more (or less) than two printed pages for each of 146 subjects was a very special challenge. The book covers fundamentally important achievements of technology that directly impacted mankind or even profoundly changed it. Many of those highlights are quite new, at least one of them (power generation by nuclear fusion) is not available yet. But particularly ingenious things dating way back were also included, as they are the base of our technical civilization Good examples are ceramics as well as copper, bronze and iron; whole periods of history have been named for the latter three. The analog computer of Antikythera used for stellar navigation was made some 2100 years ago, gunpowder was used in China as early as 1044 A.D., the astronomical clock in the Strasburg cathedral was built in the 19th century. On the other hand, Theodor W. HÃ¤nsch and John L. Hall were granted a Nobel Prize in 2005 for a discovery that brought us extremely accurate optical clocks. And the Smartphone was a 2007 breakthrough; hundreds of millions of them have been sold since then. The basic concept of describing and explaining major technological highlights to non-scientists with just 800 words was inspired by the column 'Inventions - fifty years later' in the Swiss daily 'Neue ZÃ¼rcher Zeitung' (NZZ), to which the author contributed on a regular base since 2007. The column was later renamed 'Achievements of Technology' - no more time limits. Many of the book-chapters were taken from those sources, updated, edited and translated into English. Other sources were articles the author wrote for various newspapers and magazines. However, many highlights of technology were researched and written specifically for this book. Reading it is both fun and highly instructive.