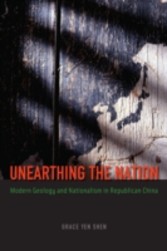 Questions of national identity have long dominated China's political, social, and cultural horizons. So in the early 1900s, when diverse groups in China began to covet foreign science in the name of new technology and modernization, questions of nationhood came to the fore. In Unearthing the Nation, Grace Yen Shen uses the development of modern geology to explore this complex relationship between science and nationalism in Republican China.Shen shows that Chinese geologists-in battling growing Western and Japanese encroachment of Chinese sovereignty-faced two ongoing challenges: how to develop objective, internationally recognized scientific authority without effacing native identity, and how to serve China when China was still searching for a stable national form. Shen argues that Chinese geologists overcame these obstacles by experimenting with different ways to associate the subjects of their scientific study, the land and its features, with the object of their political and cultural loyalties. This, in turn, led them to link national survival with the establishment of scientific authority in Chinese society.The first major history of modern Chinese geology, Unearthing the Nation introduces the key figures in the rise of the field, as well as several key organizations, such as the Geological Society of China, and explains how they helped bring Chinese geology onto the world stage.