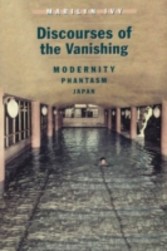 Japan today is haunted by the ghosts its spectacular modernity has generated. Deep anxieties about the potential loss of national identity and continuity disturb many in Japan, despite widespread insistence that it has remained culturally intact. In this provocative conjoining of ethnography, history, and cultural criticism, Marilyn Ivy discloses these anxieties-and the attempts to contain them-as she tracks what she calls the vanishing: marginalized events, sites, and cultural practices suspended at moments of impending disappearance.Ivy shows how a fascination with cultural margins accompanied the emergence of Japan as a modern nation-state. This fascination culminated in the early twentieth-century establishment of Japanese folklore studies and its attempts to record the spectral, sometimes violent, narratives of those margins. She then traces the obsession with the vanishing through a range of contemporary reconfigurations: efforts by remote communities to promote themselves as nostalgic sites of authenticity, storytelling practices as signs of premodern presence, mass travel campaigns, recallings of the dead by blind mediums, and itinerant, kabuki-inspired populist theater.