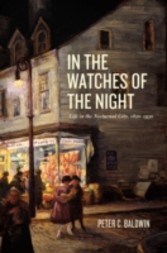 Before skyscrapers and streetlights glowed at all hours, American cities fell into inky blackness with each setting of the sun. But over the course of the nineteenth and early twentieth century, new technologies began to light up streets, sidewalks, buildings, and public spaces. Peter C. Baldwin's evocative book depicts the changing experience of the urban night over this period, visiting a host of actors-scavengers, newsboys, and mashers alike-in the nocturnal city.Baldwin examines work, crime, transportation, and leisure as he moves through the gaslight era, exploring the spread of modern police forces and the emergence of late-night entertainment, to the era of electricity, when social campaigns sought to remove women and children from public areas at night. While many people celebrated the transition from darkness to light as the arrival of twenty-four hours of daytime, Baldwin shows that certain social patterns remained, including the danger of street crime and the skewed gender profile of night work. Sweeping us from concert halls and brothels to streetcars and industrial forges, In the Watches of the Night is an illuminating study of a vital era in American urban history.