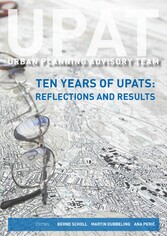 As part of the ISOCARP 50th anniversary programme, the publication of Ten Years of UPATs: Reflections and Results is certainly one of the 'flagship' activities of ISOCARP. We have to thank the editors and authors, as well as all the members of the Urban Planning Advisory Teams who contributed to the impressive quality of this publication. The initiation of the UPATs was a turning point in the activities of ISOCARP as a professional organisation. Instead of limiting its role to reflecting on activities, it turned into a pro-active organisation intervening in the real world, rather than serving only as a consultant. The UPATs try to 'open eyes and doors', to think and act in other directions, and start collaborative and innovative planning processes rolling. At the same time, the UPATs created the opportunity to bring ISOCARP members together: new planners and experienced planners with widely divergent backgrounds and their own specific areas of expertise. Unexpectedly, the UPATs created a kind of 'cement' among ist members and gave ISOCARP a new active face. The publication is clearly structured, complete and much more than a pure report. It contains an elaboration of the objectives of the UPAT concept, an interesting explanation and justification of the planning methodology and maxims, a brief comparative analysis of similar expert advisory platforms applying collaborative planning procedures, and a general description with the categories and characteristics of all the UPATs. The core of the book is devoted to the description of case studies, the organisation and management of the workshops, and, ultimately, to an elucidation of the lessons learned. When we think about the role of ISOCARP in the future, we should take the UPATs as an example for the way a modern professional organisation can act, not only through knowledge sharing, but also by developing visions, concepts and concrete solutions for complex urban problems within a collaborative setting.