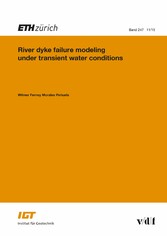 Knowledge of the performance of river dykes during flooding is necessary when designing governmental assistance plans aimed to reduce both casualties and material damage. This is especially relevant when floods have increased in their frequency during the last decades, together with the resulting material damage and life costs. Most of previous attempts for analyzing dyke breaching during flooding have neglected to consider the soil mechanics component and the influence of infiltration and saturation changes on the failure mechanisms developed in the river dyke. This research project aimed to fill that gap in knowledge by analyzing, in a comprehensive manner, the effect of transient water conditions, represented by successive flood cycles, on the seepage conditions and subsequent breaching of dykes. Therefore, three key sub-projects were carried out: the analysis of the results from an overflow field test, the physical modeling of small-scaled models under an enhanced gravity field, the numerical modeling of the flow response and the resulting stability of both the air- and water-side slopes. The results from the numerical simulations matched accurately with the results obtained with the centrifuge modeling, including the prediction of local instabilities during the flood cycles for those dykes that did not include a toe filter.