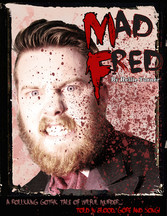 This 'play-in- a -play', written by veteran Australian playwright Hellie Turner in 2013, is an imagining based on a true story - the story of a captivating character in fascinating circumstances. In May 1892, Frederick Bailey Deeming, known by some twenty other aliases (master conman, bigamist and brutal murderer) met his much-deserved destiny with the executioner. Investigation of the original murder for which he was convicted, led to the exposure of further grisly murders back in England, and revealed a lifetime of bizarre behaviour. The murders, the convoluted events leading up to his capture in Western Australia, his extradition to Victoria, the trial and ultimately his hanging, caused a media and public frenzy never before seen in Australia. The play is scaffolded by the court transcripts, newspaper articles of the time, and details gleaned from further biographical texts dedicated to the excavation of Deeming's extra-ordinary life and ultimate death at the hands of the colonial judicial system. The playwright's use of lyrical language and song alleviates the serious, potentially 'dry' nature of the research material. The development of songs to pertinently support the dramatic machinations and characterisations of the play, and to bring to mind the vibrancy of the era, required significant collaborative exploration of vaudevillian and burlesque music by Hellie Turner and Ash Gibson Greig, the composer for the 2013 performance at the Perth Cultural Centre, Western Australia. A play written by Alfred Dampier, WILFUL MURDER, opened at the time of the trial, and was staged in Melbourne in 1892. A play (non-musical) based on the same subject was written in 2012 by Frank Gauntlett. It has been performed on the east coast of Australia, but has not been published.