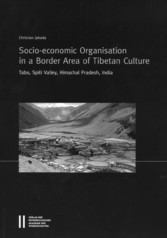 
This study reconstructs for the first time the development of society in Spiti and in Upper Kinnaur (Himachal Pradesh, India) over a long historical period on the basis of one of its central structures, that is, socio-economic organisation. The focus of this study is the peasantry of Tabo village in Spiti Valley and the adjacent Tibetan-speaking areas in the northwestern Himalayas. From a methodological perspective this book is primarily the result of a combination of social anthropological fieldwork and the analysis of historical and contemporary written sources (partly from the holdings of the over 1,000-year-old Buddhist monastery of Tabo). The theoretical concepts and perspectives of this work, building at the core on peasant theory models, are considerably developed further by including and integrating findings from social anthropological research on Tibet, in particular the fundamental importance of religious institutions such as Buddhist monasteries and temples for the structuring of the social order. The account of the ethnography of the region forms together with the investigation of the system of land ownership in association with the system of taxes and dues a central component of the analysis of the historical and current relations between the power-holders and the agricultural producers (peasants). It is also in this context that the delineation of the political history of the region which is undertaken here for the first time plays an essential role. Moreover, in altogether 12 excursuses selected key topics (such as administrative and taxation system, corvÃ©e labour, regional, supraregional and transnational wool trade, economy of Buddhist monastic communities and monasteries, development of population figures) are studied from a strong comparative perspective.