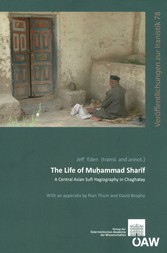 
The story of the Sufi saint Khwaja Muhammad Sharif is one of the best-loved hagiographies from East Turkistan (present-day Xinjiang, China), where the saint's shrine remains a place of pilgrimage and devotion to this day. The Khwaja's narrative recounts his adventures as he travels from Central Asia to Hindustan, Mecca, and back again, guided by saintly spirits and working miracles at every turn. He saves Muslims from shipwreck, gains powerful disciples, wages holy war, and ends his days as a beloved Sufi master. Jeff Eden's introduction and notes offer insights into the text and its interpretation, and his translation marks the first time that a complete East Turkistani hagiography has been made available to readers in English. The appendix, by Rian Thum and David Brophy, reveals the intricate liaison between Muhammad Sharif's shrine complex, its elite patrons, and the present hagiography. A classic of its genre, the Life of Muhammad Sharif provides both an accessible introduction to Central Asian Sufi literature and a compelling mystical allegory on the attainment of spiritual perfection.