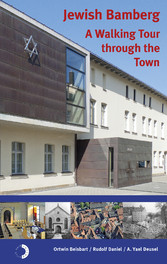 A journey of learning about Jewish life in Bamberg/Germany through many centuries till today.
A guide to the Jewish sites in the city as well as to the former Jewish Displaced Persons Camp and to the cemetery in 11 Stops.
An information on the time span in which Jews lived in Bamberg, from the year 1100 till the 21st century.
With more than 60 illustrations and an invitation to walk through the city of Bamberg - virtually or really.