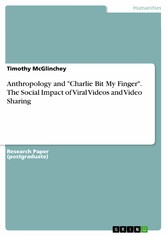 Anthropology and 'Charlie Bit My Finger'. The Social Impact of Viral Videos and Video Sharing

Anthropology and 'Charlie Bit My Finger'. The Social Impact of Viral Videos and Video Sharing


Research Paper (postgraduate) from the year 2015 in the subject Ethnology / Cultural Anthropology, grade: 1.0, Queen's University Belfast (School of History and Anthropology), course: Social Anthropology, language: English, abstract: In the following project, I intend to explore the social dynamics surrounding this relatively unexamined occurrence, whilst focusing specifically on the processes and motivations behind video sharing. In the past decade alone, the aptly named 'viral video' has progressed from a novel phenomenon, to an almost daily occurrence on the internet. These are defined by their capacity to spread through social media outlets at alarming rates, and gain the attention of staggering numbers of people throughout the world. Importantly, the mass dissemination of these videos relies substantially on individuals choosing to share them online, through websites such as Facebook and Twitter.