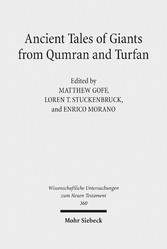 Ancient Tales of Giants from Qumran and Turfan - Contexts, Traditions, and Influences

Ancient Tales of Giants from Qumran and Turfan - Contexts, Traditions, and Influences


While there has been much scholarly attention devoted to the Enochic Book of the Watchers , much less has been paid to the Book of Giants from Qumran. This volume is the proceedings of a conference that convened in Munich, Germany, in June 2014, which was devoted to the giants of Enochic tradition and in particular the Qumran Book of Giants . It engages the topic of the giants in relation to various ancient contexts, including the Hebrew Bible, the Dead Sea Scrolls, and ancient Mesopotamia. The authors of this volume give particular attention to Manichaeism, especially the Manichaean Book of Giants , fragments of which were found in Turfan (western China). They contribute to our understanding of the range of stories Jews told in antiquity about the sons of the watchers who descended to earth and their vibrant Nachleben in Manichaeism.