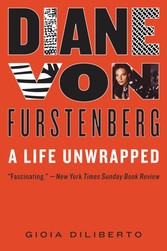 A sweeping biography of one of the most influential and controversial legends of late twentieth-century fashion, an iconic designer whose colorful creations, including the wrap dress, captured the modern feminist spirit.The daughter of a Holocaust survivor and wife of an Austrian nobleman, Diane von Furstenberg burst onto New Yorks fashion scene in 1969, and within a few years became an international sensation with her colorful wrap dress in printed jersey. Embraced by millions of American women of all ages, sizes, and shapes, the dress became a cult object and symbol of womens liberation, tied inexorably to the image of youth, independence, and sex Diane herself projected.In this masterful biography, Gioia Diliberto brings Dianes extraordinary life into focus, from her post-World-War-II childhood in Belgium, through her rise to the top of the fashion world during the decadent seventies and glamorous go-go eighties, to her humiliating failures both professional and personal, and her remarkable comeback in the nineties. Like Coco Chanel, Diane has always been her own best advertisement. Morphing from a frizzy brunette outsider in a sea of sleek blondes to a stunning pop cultural icon, she embodied the brand she createdthe DVF woman, a model of self-sufficiency, sensuality, and confidence.Dilibertos captivating, balanced portrait, based on scores of interviews with Dianes family, friends, lovers, employees, and the designer herself, explores von Furstenbergs relationships with her husbands and lovers, and illuminates fashions evolution from rare luxury to marketing monster and the development of a uniquely American style. Lively and insightful, the book also explores the larger world of the nations elite, where fashion, culture, society, politics, and Hollywood collide. Diane von Furstenberg is a modern fable of self-invention, fame, wealth, failure, and success that mirrors late-twentieth century America itself.