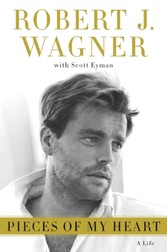 Pieces of My Heart - A Life

Pieces of My Heart - A Life

In this moving memoir, Robert J. Wagner opens his heart to share the romances, the drama, and the humor of an incredible lifeHe grew up in Bel Air next door to a golf course that changed his life. As a young boy, he saw a foursome playing one morning featuring none other than Fred Astaire, Clark Gable, Randolph Scott, and Cary Grant. Seeing these giants of the silver screen awed him and fueled his dreams of becoming a movie star. Battling a revolving door of boarding schools and a father who wanted him to forget Hollywood and join the family business, sixteen-year-old Wagner started like any nave kid wouldwalking along Sunset Boulevard, hoping that a producer or director would notice him.Under the mentorship of stars like Spencer Tracy, he would become a salaried actor in Hollywood's studio system among other hot actors of the moment such as his friends Rock Hudson and Tony Curtis. Working with studio mogul Darryl Zanuck, Wagner began to appear in a number of films alongside the most beautiful starletsbut his first love was Barbara Stanwyck, an actress twice his age. As his career blossomed, and after he separated from Stanwyck, he met the woman who would change his life forever, Natalie Wood. They fell instantly and deeply in love and stayed together until the stress of their careershers marching upward, his inexplicably deflatingdrove them to divorce.Trying to forget the pain, he made more movies and spent his time in Europe with the likes of Steve McQueen, Sophia Loren, Peter Sellers, Laurence Olivier, David Niven, Liz Taylor, and Joan Collins. He would meet and marry the beautiful former model and actress Marion Marshall. Together they had a daughter and made their way back to America, where he found himself at the beginning of a new era in Hollywoodthe blossoming of television. Lew Wasserman and later Aaron Spelling would work with Wagner as he produced and starred in some of the most successful programs in history. Despite his newfound success, his marriage to Marion fell apart. He looked no further than Natalie Wood, for whom he still pined. To the world's surprise, they fell in love all over again, this time more deeply and with maturity. As she settled into a domestic life, raising their own daughter, Courtney, as well as their children from previous marriages, Wagner became the sole provider, reaping the riches of television success. Their life together was cut tragically short, though, when Wood died after falling from their yacht.For the first time, Wagner writes about that tremendously painful time. After a serious bout with depression, he finally resurfaced and eventually married Jill St. John, who helped keep his family and his fractured heart together. With color photographs and never-before-told stories, this is a quintessentially American story of one of the great sons of Hollywood.