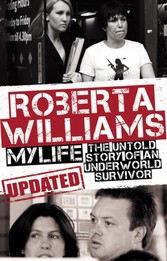 Roberta Williams' revealing life story - from abuse to prison, Carl to the paparazzi. Now, in the wake of Carl's brutal murder at the hands of a fellow inmate in Barwon Prison, Roberta is once again compelled to live her life in the public eye, all the while attending with unwavering devotion to the needs of her greatest priority - her four children. When the hitman hiding in Roberta Williams' roof confessed that he couldn't kill her, she knew she had to get herself and her kids out of the bloodiest battle the Australian underworld had ever known. Roberta's marriage to Melbourne career criminal Carl Williams had been a rollercoaster ride, but it was still a welcome antidote to her life before Carl. the youngest of seven children, her father died when she was a baby, and she was beaten by her mother and stepfather, kicked out of school for fighting and made a ward of the state at eleven. Her early romantic relationships were marked by physical abuse, including marriage to an abattoir worker with some dangerous friends, the Moran brothers. In stark contrast, Carl treated her better than any other man she'd ever known. Content with a stable family life and enjoying Carl's increasing wealth, Roberta wasn't overly concerned with her husband's occupational hazards, the police charges, the drug trafficking, the payoffs, until the bodies started turning up. She found herself tangled in a vicious web of deceit, denial and payback as the feud erupted onto the streets.