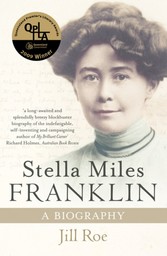 The award-winning biography of one of Australia's best-loved writers ... The author of MY BRILLAINT CAREER had a fascinating career of her own ... Winner of the Adelaide Festival Award for Literature for Non-Fiction 2010 'a long-awaited and splendidly breezy blockbuster biography of the indefatigable, self-inventing and campaigning author of My Brilliant Career' Richard Holmes, AUStRALIAN BOOK REVIEW 'to meet Miles Franklin was as invigorating as to ride on a spring morning across the Monaro plains she so dearly loved' Henrietta Drake-Brockman Stella Miles Franklin was born in the Australian bush. At the age of twenty-one, she became an international publishing sensation with MY BRILLIANt CAREER, which more than a century later is still regarded as an Australian classic. Miles' early success gave her entre to literary and socialist circles in Sydney and Melbourne. there she met Banjo Paterson, the Goldstein sisters and Joseph Furphy, among others. In 1906 she went to work for the women's labour movement in Chicago. In 1915 she relocated to London and quickly found herself travelling to the Balkans to help nurse wounded Allied soldiers. Returning to London, she campaigned for various feminist and progressive causes, all the while continuing to write, often submitting work under pseudonyms that she guarded fiercely all her life. In the 1930s she returned to Australia, taking up the cause of Australian writers. Novelist, journalist, nationalist, feminist, larrikin - Miles Franklin was all these and more. And her endowment of the Miles Franklin Literary Award founded an Australian cultural institution that remains our most prestigious prize for literature.'more than the definitive biography of Australia's most gregarious literary figure' WEEKEND AUStRALIAN 'Roe's mighty biography of a woman who was pivotal to the culture during a formative period of Australian literary life is meticulous and welcome' Hilary McPhee, tHE AUStRALIAN