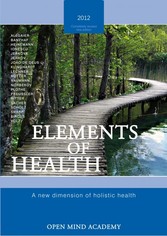 ELEMENTS OF HEALTH - 2012 - A new dimension of holistic health

ELEMENTS OF HEALTH - 2012 - A new dimension of holistic health

This book contains the summarized knowledge of experts, predominantly practicing doctors and therapists, from a wide range of medical specialties. The authors feel an obligation to focus their treatment on the real causes of diseases and on the benefit for the patient. A broad spectrum of themes is addressed, from state-of-the-art holistic medicine based on natural sciences to the level of spiritual healing. Thus, the book establishes a bridge between the physical and the mental/spiritual level; it is the design of an integrative medicine in which the best of two worlds is combined: traditional and complementary medicine. In the first part general principles on the way to health are explained. This comprehends all three levels of the human being: the somatic/physical level (containing chapters on nutrition, exercise and detoxification), the psychical/emotional level (with chapters such as 'Human Needs Psychology', 'Unmasking patterns and belief systems' and 'Trauma and stress') and the mental/spiritual level ('Mindfulness' and 'Spiritual healing'). In the second part important medical conditions such as allergies, cancer or neurodegenerative diseases are explained as to cause, diagnosis and therapy. This includes a detailed presentation of some causative factors and therapeutic principles little-known so far. Of significant importance is the chapter 'Radiation - Fukushima threatening the World'. The third part is a sophisticated description of holistic dental medicine. The harmful effects of metals e. g.as being used in amalgam fillings and of hidden inflammation are explained as well as their adequate treatment. The interconnectedness of human and dental medicine, the far reaching consequences especially for severe chronic diseases and how to implement this knowledge into therapeutic practice is one of the unique issues of the book. With this book, three groups of readers are addressed. First, people who want to learn about important health issues of our time. Second, sick people who are seeking information about their medical condition. For them, some very detailed hints are included. They may be too specific for many readers but can be very valuable for individual people. Finally, the book addresses physicians, dentists and therapists who will find a wealth of information for their practical work and about new directions in medicine. Authors of the OPEN MIND ACADEMY: Thomas Allgaier Banzhaf Banzhaf JoÃ£o de Deus JoÃ£o Teixeira de Faria Gundi Heinemann Klaus Heinemann John G. Ionescu Tatyana Jerkova Georgi Jerkov Dietrich Klinghardt Johann Lechner Joachim Mutter Johannes Naumann Mirsakarim Norbekov Christof Plothe Christfried PreuÃler Tina Maria Ritter Juliane Sacher Holger Scholz Anna Sharp Mark Sircus Karl Ulrich Volz

OPEN MIND ACADEMY represents a growing group of scientists, doctors and therapists who look with an open mind at the causes of disease and treat purely on the basis of benefit for the patient. These individuals are giving their knowledge free of charge - guided by the search for truth and love for their fellow men. Mainstream is based on standardized knowledge that is often not questioned for long periods, because its members must be adapted in order to preserve it. However, our world has always only been changed for the better by 'troublemakers', such as Einstein or Mozart. We need such people as we must recognize that the mainstream will not lead us out of the impasse into which it has led us. Aim is to give sick patients the knowledge they need to take control of their own healing. Authors: Thomas Allgaier Banzhaf Banzhaf JoÃ£o de Deus JoÃ£o Teixeira de Faria Gundi Heinemann Klaus Heinemann John G. Ionescu Tatyana Jerkova Georgi Jerkov Dietrich Klinghardt Johann Lechner Joachim Mutter Johannes Naumann Mirsakarim Norbekov Christof Plothe Christfried PreuÃler Tina Maria Ritter Juliane Sacher Holger Scholz Anna Sharp Mark Sircus Karl Ulrich Volz