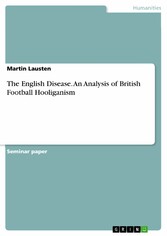 The English Disease. An Analysis of British Football Hooliganism

The English Disease. An Analysis of British Football Hooliganism


Seminar paper from the year 2016 in the subject Cultural Studies - Miscellaneous, grade: A-, , language: English, abstract: Wandering the ground outside Old Trafford Buford tried to find some hooligans that he could interview. However, he could not find any because initially he could not tell the hooligans apart from the average fans. Instead, Buford saw thousands of fans all behaving in the same manner; singing, dancing, shouting, drinking and celebrating, and he realised that the hooligan fan in many ways behaved exactly like the average fan. Buford finally found one of 'them', a fella named Mick, who belonged to the Manchester United firm known as ICJ, the Inter-City Jibbers (named after the British Rail commuter service). Through Mick Buford was introduced into the subculture of hooligans, and through Buford and many others, certain conclusions have been drawn about the hooligans and the hooligan phenomenon. Most sociologist, anthropologists, and psychologists thus agree that roughly six primary features underpin the construction of the hooligan identities; 1) excitement and pleasurable emotional arousal of violence, 2) hard masculinity, 3) territorial identifications, 4) representations of sovereignty and autonomy, 5) individual and collective management of reputation, and finally, 6) a sense of solidarity and belonging. These shared features or commonalities allow us to begin the analysis of football hooliganism as a subcultural activity which will be the focus of the following sections.