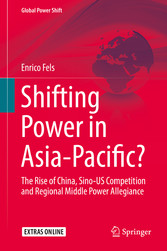 This book investigates whether a power shift has taken place in the Asia-Pacific region since the end of the Cold War. By systematically examining the development of power dynamics in Asia-Pacific, it challenges the notion that a wealthier and militarily more powerful China is automatically turning the regional tides in its favour. With a special emphasis on Sino-US competition, the book explores the alleged linkage between the regional distribution of relevant material and immaterial capabilities, national power and the much-cited regional power shift.
The book presents a novel concept for measuring power in international relations by outlining a composite index on aggregated power (CIAP) that includes 55 variables for 44 regional countries and covers a period of twenty years. Moreover, it develops a middle power theory that outlines the significance of middle powers in times of major power shifts. By addressing political, military and economic cooperation via a structured-focused comparison and by applying a comparative-historical analysis, the book analyses in depth the bilateral relations of six regional middle powers to Washington and Beijing.

Enrico Fels is a research fellow and lecturer at the Center for Global Studies (CGS), University of Bonn. He holds a Bachelors degree from Ruhr-University Bochum in Political Science, Economics and Sociology and has a Masters degree from the Australian National University in Strategic Studies, where he also was a T.B. Millar Scholar in Strategic and Defence Studies. Enrico received his PhD from Bonn University. He is regularly presenting at international conferences, publishes his research in books and articles and is frequently invited to give lectures. Enrico leads the CGS research group on 'Security and Diplomacy' and is co-editor to the book Power in the 21st Century. International Security and International Political Economy in a Changing World (Springer, 2012). His research interests and expertise include traditional and non-traditional security issues, international political economics as well as the strategic and geoeconomic consequences of an emerging Asia to Europe and the United States.