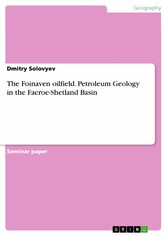 
Seminar paper from the year 2014 in the subject Geography / Earth Science - Geology, Mineralogy, Soil Science, grade: 56, Robert Gordon University Aberdeen (School of Engineering), course: ENM200 - Subsurface, language: English, abstract: The Foinaven oilfield was the first reserve development West of the Shetlands in the deepwater, it is a good quality producing oil field which provides significant hydrocarbon potential, one of largest oilfield of United Kingdom. This field was discovered in 1990 by British Petroleum (well# 204/24-1A) in the Faeroe-Shetland Basin in two blocks, 204/19 and 204/24a in the UK Continental Shelf. These blocks are located around 190km west of the Shetland Islands. Marine environment can be characterized as deep water conditions (450 m) and strong subsea currents (4.5 km/hr). First hydrocarbons from the Foinaven play were produced in Nov.1997. The recoverable reserves were originally calculated at 200 million barrels and lately were estimated at 415 million barrels at 2004.