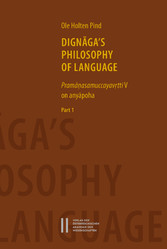 
The Buddhist philosopher Dign?ga (around 500 CE) centers his philosophy of language on the theorem of verbal meaning as 'exclusion of other referents' (any?poha). This is the topic of the fifth chapter in his summarizing last work, the Pram??asamuccayav?tti. Since a word tells its hearer something about the object to which it refers in the same way that a logical reason tells its observer something about the object of which it is a property, Dign?ga's apoha thesis is a crucial complement to his theory of inference. The original Sanskrit text of this work is no longer extant. Except for a few Sanskrit fragments and two highly problematic Tibetan translations it is only the since recently available unique Sanskrit manuscript of the mid-8th century CE commentary, the Pram??asamuccaya??k?, by Jinendrabuddhi that allows for a faithful English translation. Jinendrabuddhi's text has been used throughout and, in parts, critically edited for the first time. On the basis of these sources it was possible to provide the translation with a restoration as far as possible of the original Sanskrit text of Dign?ga's work. In his introduction, Pind surveys his methodology, discusses the sources, the context and historical position, and the character of this chapter, and he also deals with Jinendrabuddhi's commentary, his sources and its restoration. Moreover, he presents the essential features of the apoha thesis in detail. The translation of this rather difficult text is richly annotated and provides all philological information in support of the text's restoration as well as extensive explanations and discussions of the content. It is in the notes that Pind provides the background of Indian grammatical analysis and theory (Bhart?hari and others) and documents the context of the rival philosophical traditions such as those of the Ny?ya and M?m?s?. Pind is also particularly aware of the influences on Jinendrabuddhi's interpretation that derive from Dharmak?rti's interpretation of Dign?ga's tenets and consistently analyses the differences occurring. Several appendices conclude this study by presenting a number of notes separated because of their size. After Richard Hayes' study and translation of the first part of this chapter (1988), this is the first comprehensive presentation of Dign?ga's philosophy of language.