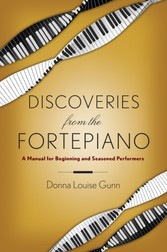 Discoveries from the Fortepiano: A Manual for Beginning and Seasoned Performers

Discoveries from the Fortepiano: A Manual for Beginning and Seasoned Performers

Discoveries from the Fortepiano uncovers eighteenth-century performance practices and philosophical beliefs, enabling modern performers to craft an authentic, historically influenced style. Using a variety of primary sources and scholarly interpretations, noted keyboard pedagogue Donna Gunn offers a guide on Classical Era piano performance practice that is at once accurate to the scholarship and accessible to the performer. Gunn surveys and explains eighteenth-century music notational language, and from this develops tools that get at the heart of the otherwise enigmatic sound aesthetic of the era. Through over 100 music examples, Gunn provides specific answers to performance questions regarding period influences on the modern piano, including technique, dynamics, articulation, rhythm, ornamentation, and pedaling. A Companion Website houses recordings of three versions for each music example that demonstrate different interpretations and deliveries. Gunn encourages the reader to study the sources, listen carefully, and experiment with the past in the present. Remarkably researched and engagingly written, Discoveries from the Fortepiano is an indispensable aid to any pianist who seeks both an academically and artistically sound approach to performing in the Classical Era style.