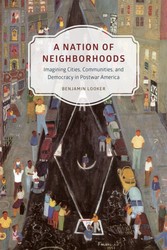 Despite the pundits who have written its epitaph and the latter-day refugees who have fled its confines for the half-acre suburban estate, the city neighborhood has endured as an idea central to American culture. In A Nation of Neighborhoods, Benjamin Looker presents us with the city neighborhood as both an endless problem and a possibility.Looker investigates the cultural, social, and political complexities of the idea of ",neighborhood", in postwar America and how Americans grappled with vast changes in their urban spaces from World War II to the Reagan era. In the face of urban decline, competing visions of the city neighborhood's significance and purpose became proxies for broader debates over the meaning and limits of American democracy. By studying the way these contests unfolded across a startling variety of genres-Broadway shows, radio plays, urban ethnographies, real estate documents, and even children's programming-Looker shows that the neighborhood ideal has functioned as a central symbolic site for advancing and debating theories about American national identity and democratic practice.