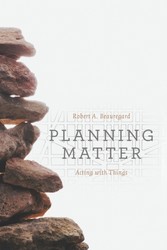 City and regional planners talk constantly about the things of the world-from highway interchanges and retention ponds to zoning documents and conference rooms-yet most seem to have a poor understanding of the materiality of the world in which they're immersed. Too often planners treat built forms, weather patterns, plants, animals, or regulatory technologies as passively awaiting commands rather than actively involved in the workings of cities and regions.In the ambitious and provocative Planning Matter, Robert A. Beauregard sets out to offer a new materialist perspective on planning practice that reveals the many ways in which the nonhuman things of the world mediate what planners say and do. Drawing on actor-network theory and science and technology studies, Beauregard lays out a framework that acknowledges the inevitable insufficiency of our representations of reality while also engaging more holistically with the world in all of its diversity-including human and nonhuman actors alike.