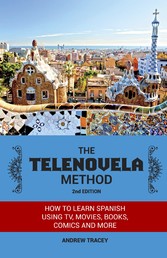 After failing to learn a new language on five separate occasions, I taught myself to speak Spanish like a native in just six months by watching movies and TV shows, listening to music, and reading books and comics like Harry Potter and Garfield. This simple, easy-to-learn technique, that even the most linguistically-challenged can master literally overnight, is used by many of the most respected and skilled polyglots and language teachers in the world, and it's never really been laid out, explained, and demonstrated in full, point-by-point, step-by-step detail until now. When characters in a movie or TV show are speaking the dialogue, unless it's set in a previous period like the 1800s or something, they speak normal, everyday language. So if you wanted to learn Spanish, the type of normal everyday Spanish that native speakers use every day, aka 'conversational Spanish'... Don't you think that Spanish-language TV shows, movies, music, and books might be a good source to learn from...if only you knew how? Not only that, but it would be fun, wouldn't it? Far better than learning the language from some boring, dry textbook or workbook that, even worse, is teaching outdated, formal, 'non-conversational' Spanish (look at the dialogue in one sometime: do people actually talk like that? No). Has this basic technique been used for centuries by language students and teachers alike? Yes, there are records dating back to the 18th century of language teachers using popular media in the language they're teaching to help their students learn it. I'm not claiming to have invented it. What I've done here is, after having used and refined the technique myself for several years, distilled it down to a system that's easy to learn, and which is taught in a format that's organized, easy to understand, and which takes advantage of all the latest technology, such as the all the various resources available on the internet now.