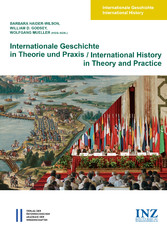 
Today's processes of internationalization and globalization present a challenge to the discipline of history as well. It has become clear that the paradigm of the nation-state as the dominant historiographical model is no longer tenable. Against this background, several historiographical approaches have become apparent that go beyond national borders in both the questions asked and the methods used. These include not only transnational and global history, but also source-based International History. As a dynamic field, the latter is distinguished by a basic openness whose multiple perspectives should not be confused with simple randomness. This volume, which was conceived in the research unit International History of the Institute for Modern and Contemporary Historical Research of the Austrian Academy of Sciences, contributes with its 27 articles to the current scholarly debate in several original ways. Apart from illuminating the historiographical spaces of International History, it represents the first attempt to pull together the relevant work being done on all historical epochs. Given that the spectrum ranges from the ancient to the contemporary world and the concept of the state is thereby historicized, the volume contributes to overcoming the field's traditional focus on the classical nation-states of the 19th and 20th century. The volume also bridges the gap between theory and practice: its many case-studies illustrate the striking thematic expansion of the field of International History without trying to impose a fixed canon.