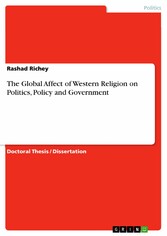 The Global Affect of Western Religion on Politics, Policy and Government

The Global Affect of Western Religion on Politics, Policy and Government


Doctoral Thesis / Dissertation from the year 2016 in the subject Politics - International Politics - Topic: Globalization, Political Economics, grade: EP, , course: Doctor of Philosophy, language: English, abstract: The present paper investigates the effect of Western religion on governance, policies, and politics, within both the domestic and the global contexts. This question, however, leads into the need for deep ideological analysis. The paper thus defines the concept of Western religion, and then proceeds to show how Western religion is inseparable from Western civilization, including modern values which are often called secular but which, in fact, have ideological roots that can be traced to Western religion. Over the course of this analysis, an opposition emerges between Western religion on the one hand and secular progressivism on the other-the latter of which is both derived from and antagonistic toward Western religion. The contours of this ideological conflict and their implications are explored through the development of a comprehensive theoretical framework. The independent research of the present paper consists of an interview with a selected congressman. The interview seeks to delve into the congressman's views regarding Western religion and its effects on governance, policies, and politics. This data is analyzed using a qualitative method. Finally, the present paper analyzes and discusses the statements of the congressman in the interview in light of the previously developed theoretical framework. The main conclusion that is reached is that although the congressman is insightful in several respects, he seems to lack a general awareness of the nature of ideology, or the fact that secular progressivism is in ideological conflict with Western religion, even as the former cannot escape the influence of the latter. A key recommendation that emerges from this conclusion is that it is perhaps necessary for both politicians in particular and Americans in general to develop a deeper understanding of the nature of ideology, especially as this pertains to politics.